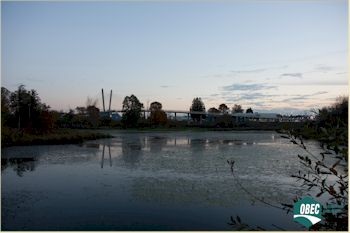 The Delta Ponds Bridge opened for permanent use by cyclists and pedestrians on Tuesday, November 16, 2010.

The bridge and elevated path spans the Delta Highway and connects the neighborhoods on the east side of the highway with Goodpasture Island Road and the commercial, residential and transportation facilities in the Valley River area.

A dedication event to mark the substantial completion of the $5.6 million bridge project was held in September 2010.

The bridge, which was dedicated in September 2010, removed a physical barrier between the Willakenzie neighborhood and the Delta Ponds parkland and wildlife habitat that had been in place since the Delta Highway was constructed in 1966. The bridge is also fully compliant with the Americans with Disabilities Act and provides access for all citizens.

"Elegantly designed with two soaring pylons and triangular elements that evoke the Greek letter delta, the Delta Ponds Bridge is Eugene’s latest monument to livability," said FHWA Administrator Victor Mendez in announcing the award. "The Delta Ponds Bridge provides safe and attractive bicycle and pedestrian access where none existed previously, and encourages residents to consider healthy and active transportation alternatives. This project demonstrates that dedicated bicycle and pedestrian infrastructure is an important component of the transportation network."