203 species of birds have been observed in the wetlands and forested uplands of west Eugene. Over the past decade, several new species have been added to this bird list each year, as increasing numbers of skilled observers visit the wetlands and report their findings to West Eugene Wetlands Program staff, Oregon Birder’s Online (OBOL), or the Lane County Audubon Society. 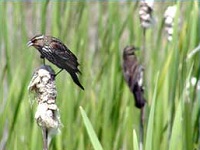 Two of the favorite birding spots within the West Eugene Wetlands are Bertelson Nature Park (which includes Stewart Pond) and Meadowlark Prairie.

The list below follows the scientific, taxonomic order of the American Ornithologists’ Union Checklist of North American Birds (seventh edition).

The following codes are used in the list below: