Land and Water in West Eugene

Basalt flows and related volcanic deposits belonging to the Western Cascades province occur in Eugene's South Hills, where they interfinger with and overlie the sedimentary rocks. The intrusive rocks, when molten, squeezed through weaknesses in the Eugene Formation and cooled slowly below the surface. Uplift and erosion have exposed these harder rocks, forming such local landmarks as Spencer and Skinner Buttes. The unconsolidated alluvium has been deposited by rivers coming out of the adjacent upland and meandering across the Willamette Valley floor. These deposits are described in more detail in the section on groundwater. 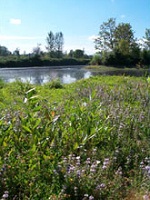 A geomorphic surface describes a landform or group of landforms formed by the same processes which represent an episode in landscape development. Wetlands in west Eugene are on the Calapooyia surface, which formed from lake sediments on the main valley floor. The Calapooyia surface formed about 10,000 years ago when huge volumes of water flooded the Columbia River after glacier-dammed lakes in Montana broke. Floodwaters backed up into the Willamette Valley, forming a large lake where fine sediments (clays and silts) settled. These floods occurred several times over thousands of years resulting in multiple layers of lake sediments in the Willamette Valley. Soil scientist refer to these lake deposits as the Willamette Formation.

The Willamette Formation consists of several different layers of sediment deposited by different flooding episodes. The layers of sediment deposited by different flooding episodes included the Greenback silts, Malpass clay, and Irish Bend silts. Malpass clay has a dominate influence on the hydric soils of west Eugene. The Malpass clay is dense, so the movement of water through it is very slow. The mineralogy of the Malpass clay gives it high shrink/swell properties, causing it to shrink when it is dry and swell when it is wet. Areas where clay is near the surface exhibit a hummocky microtopography. The slow permeability and the nearly level topography of the Calapooyia cause the soils to be ponded on that surface and poorly drained.

Dayton and Natroy are the predominant hydric soil types associated with wetland in the Plan area. Natroy is located primarily in the central portion of the area near the mainstem of Willow Creek, and Dayton predominates in the western portion of wetlands in the Plan area. Both soil types are poorly drained hydric soils. Panther and Pengra are hydric soils which occur in relatively narrow bands on fans and toe slopes along the upper reaches of Willow Creek in the southwestern part of the Plan area. Both of these soils are on the Luckiamute geomorphic surface, which is on floodplains of small drainageways.

The wet winter / spring normally begins in October and lasts through April followed by a dry summer and early fall. This pattern is typical of a Mediterranean climate. In the wetland area, soils become saturated by the end of October and begin to dry out in May. The relatively mild winters allow a growing season that lasts from February into November. The normal pattern of precipitation provides adequate hydrologic conditions to sustain most prairie wetland sites in the study area.

The water table present in the soils of the Calapooyia surface of west Eugene sits on top of the heavy clay layer formed from the Malpass clay. Because of the slow permeability of the clay layer, the amount of rainfall received in west Eugene is sufficient to exceed the infiltration capacity of the clay, creating saturated conditions in the soil profile above the clay horizon and ponding water on the soil. This is called a perched water table. The clay itself remains dry for some period, slowly wetting from the water perched above it. A regional aquifer is present at depth. The aquifer is interconnected with the Willamette River and responds more slowly to recharge from rainfall than does the perched water table. In wet years, the deeper aquifer can rise to a level of the Malpass clay horizon, causing it to converge with the perched water table.

Dayton, Awbrig, and Natroy soils have perched water tables during the rainy season from November to May when 83 percent (38 inches) of the 46 inches of average annual rainfall occurs. Height of the water table from the soil surface and soil permeability are related.

The low lying areas of the valley collect water from direct precipitation, surface runoff and subsurface sources. These low lying areas, with a flat but irregular ground surface and soils with a high clay content, are conducive to the formation of a perched water table where surface saturation or inundation are fairly common in the winter and spring months. Drainage in Eugene combines natural and built components which have evolved over time. Rivers and creeks comprise the natural drainage system and are hydrologically connected to a series of ponds and wetlands scattered throughout the valley floor.

Pre-settlement (prior to 1855) conditions in the Willamette Valley reflected a network of shallow, broad swales that would often over-bank during storm events creating ponded conditions. Today, most of the drainages have been altered into narrow, deep and well defined channels where the management objective of preventing over banking conditions has been accomplished for most small storm events. The built components of the drainage system have helped to control flooding in the urban area and include dams in the higher, relatively undeveloped portions of the Willamette basin and conveyance facilities (i.e., pipes, ditches, and channelized waterways) in and around the urban areas.

West Eugene drains to Amazon Creek with major tributaries including Willow Creek and the A3 Channel.

The Amazon Creek system originates in the hills south of Eugene and flows through the southeastern and western portion of the City, draining over 21 square miles of the City. From the foot of Spencer Butte at Martin Street, Amazon Creek has been altered. It flows northward from Martin Street though Amazon Park in an altered channel. At 24th Avenue it enters a concrete-lined channel for 1.75 miles until it enters a trapezoidal levee channel at Jefferson street near the Lane County Fairgrounds.

The Amazon Creek system west of Garfield Street is contiguous with a remnant wetland system throughout west Eugene. Amazon Creek is a vastly different waterway today than it was near the turn of the century. In 1946, after repeated flooding, Congress authorized the U.S. Army Corps of Engineers to widen, deepen, and realign the creek from Hilyard Street to Fern Ridge Reservoir. The Amazon flood control project, completed in 1958, results in today's symmetrical, trapezoidal-shaped flood control channel designed to accommodate a 25-year flood event. Current restoration and enhancement work on the lower main reach of Amazon Creek (Bailey Hill Road to the Southern Pacific railway) will return the creek to a more natural configuration. Restoration and enhancement includes widening of the creek and planting of native plant species.

Willow Creek lies within the southern portion of the Plan area flowing generally in a northerly direction until it converges with Amazon Creek near West 11th Avenue. In the Willow Creek drainage basin most of the low-land drainage system has been modified to some extent, but overall it remains in an open rather than a piped system with almost 16 miles of open channel and only 1.2 miles of public stormwater pipe. This open system has a mixture of relatively undisturbed and disturbed stream reaches (for purposes of this report, disturbance refers to human related impacts).

In the relatively undisturbed reaches, such those flowing through The Nature Conservancy's Willow Creek Natural Area, native riparian vegetation is dominant with high species diversity and abundance. Disturbed reaches have been straightened, dredged, and contain a preponderance of non-native plant species with low plant diversity and abundance. The lack of native vegetation may reflect the severing of the hydrologic linkage of the natural channel and the floodplain due to channelization.

The A3 Channel was constructed by the former Soil Conservation Service (now the Natural Resources Conservation Service) as part of the Lower Amazon and Flat Creek Watershed Improvement Project. The channel begins at the intersection of Seneca Road and 5th Avenue and flows about 3.4 miles before it empties into Amazon Creek. The channel flows through Bertelsen Slough, a twenty-five acre wetland, located east of Bertelsen Road between 1st Avenue and Stewart Road. Cattail and reed canarygrass are the dominant emergent vegetation along this perennial stream. Pockets of Oregon ash, willow and hawthorne also grow along the banks.

A flood insurance study for the Federal Emergency Management Agency has been conducted for most of the West Eugene Wetlands Plan area. There are about 756 acres in the 100-year floodplain identified in the Plan area mostly associated with Amazon Creek. The floodplain area follows a ribbon like band along Amazon Creek until about 11th Avenue where it begins to fan out in places associated with the extensive wetland system with hydrology at least partially dependent on periodic inundation.

Approximately 1,307 acres of wetland were identified at the time of Plan adoption, most lying within the central and western portions of the Plan area. A supplemental inventory identified an additional 220 acres. In addition to providing habitat for threatened, endangered, and sensitive species, many wetland provide hydrologic functions, such as flood attenuation, and groundwater recharge.