The City of Eugene partnered with the Council for Responsible Sport to develop certification standards around five major categories to guide sustainability actions at events. 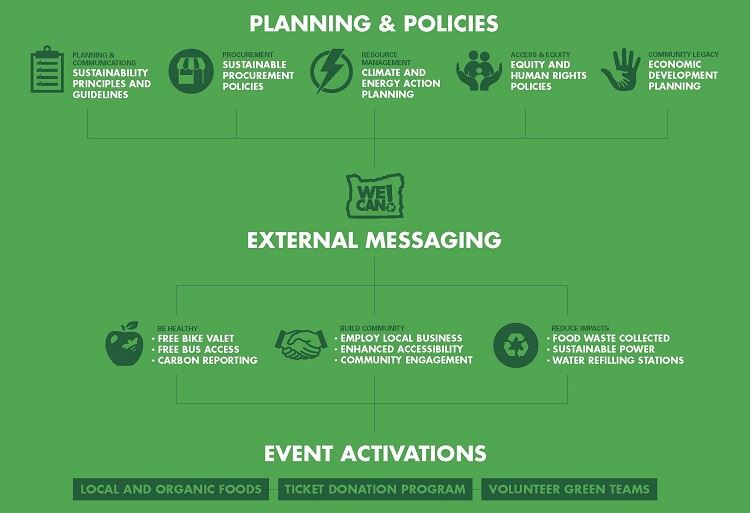 Event sustainability depends on developing an integrated Sustainability Policy that guides planning decisions using a Triple Bottom Line framework (social, economic, and environmental elements.) This is accomplished by seeking input from the host community, developing policies to promote access, equity, and the responsible use of resources, determining how sustainability will be gauged and evaluated, and then communicating the event’s intentions to the community.

Sustainability reporting after an event can be used to communicate sustainable event initiatives and efforts to stakeholders, sponsors, and attendees. Access the City of Eugene’s Sustainability Reporting Tool.

Local Example: The City of Eugene created the We Can! campaign to publicize sustainability efforts during high-profile track and field events in Eugene, such as the 2012 and 2016 U.S. Olympic Track and Field Trials and 2014 IAAF World Junior Championships. The campaign engages fans to Build Community, Reduce Impacts, and Be Healthy. Download the Proof of Concept document (PDF) that gives an overview of the We Can! campaign here.

Informed purchasing encourages sustainable resource use in the supply chain, reduces energy and resource use in purchased materials, supports local vendors, and promotes healthy food options at the event.

The Eugene Marathon took the initiative to encourage sustainable practices for race participants by creating a digital ’swag bag’ containing digital coupons for free locally sourced items such as Love Food Not Waste compost for race participants in 2017. This e-swag replaced thousands of bags of paper coupons and plastic giveaway items that were given to each race participant in years previous with e-coupons for more durable items or experiences that they could choose to redeem.

Events are now striving for and achieving ’zero waste,’ which means that they are recycling, reusing, or composting a minimum of 90 percent of the waste produced from event activities. Zero waste tracking sheets can help event organizers understand how much waste an event generates.

When planning an event in Eugene, consider going through EWEB’s Greenpower Program to calculate the average electricity usage for the duration of your event at the venue you have selected. This program funds local solar energy projects, while also supporting research and education that advance clean, renewable energy.

Our Travel Emissions Calculator (TEC) allows event organizers to accurately calculate the amount of greenhouse gases created by attendees’ event travel. The tool has grown into a valuable resource for events of all sizes. To access this tool click here.  Access the TEC on our webpages . For questions about this tool, contact the Waste Prevention Program Coordinator.

Eugene has some of the cleanest, healthiest, best tasting water around! Reduce plastic bottles at your event and promote our awesome tap water by educating participants about refilling water bottles instead of purchasing single-use plastic bottles to hand out. You can also contact our Waste Prevention Program Coordinator about using one of the City’s water bottle refilling stations at your next event.

When thinking about the Equity aspects of the triple bottom line, we define that as hosting an event that is safe and inclusive for all.

The City of Eugene’s Waste Prevention team partnered with TrackTown USA and the University of Oregon during the 2014 International Association of Athletics Federations (IAAF) World Junior Championships to showcase the community’s sustainability efforts and engage fans in dialogue about the three messages of the We Can! campaign: Be Healthy, Build Community, and Reduce Impacts.

We Can! booth staff hosted a free, interactive "Sustainability Scavenger Hunt" for the duration of the event. Collateral materials, including a Sustainability Scavenger Huntsmart phone web app, were presented in English, French, and Spanish to improve accessibility. Beginning at the booth, fans rode the Pedal Power bikes to generate electricity, and from there traveled by bus or walked to various local destinations to search for clues about Eugene’s sustainable efforts, including riding public transit, visiting businesses that participate in Love Food Not Waste (commercial composting program), fixing a flat tire or making key rings from re-used bike chains at the UO Bike Barn, or learning about GloryBee’s Save the Bee campaign and seeing a bee hive at UO’s Urban Farm.

Participants took photos of themselves while completing clues, shared them via the world-wide web, and earned a commemorative medallion made from locally reclaimed wood.

Of the 262 fans from around the world who signed up for the scavenger hunt, 120 completed it and earned a medallion. 27% were international guests and 73% were from the USA. The effort produced materials and a platform that can be modified and re-used at future events. View all We Can! Scavenger Hunt photos.