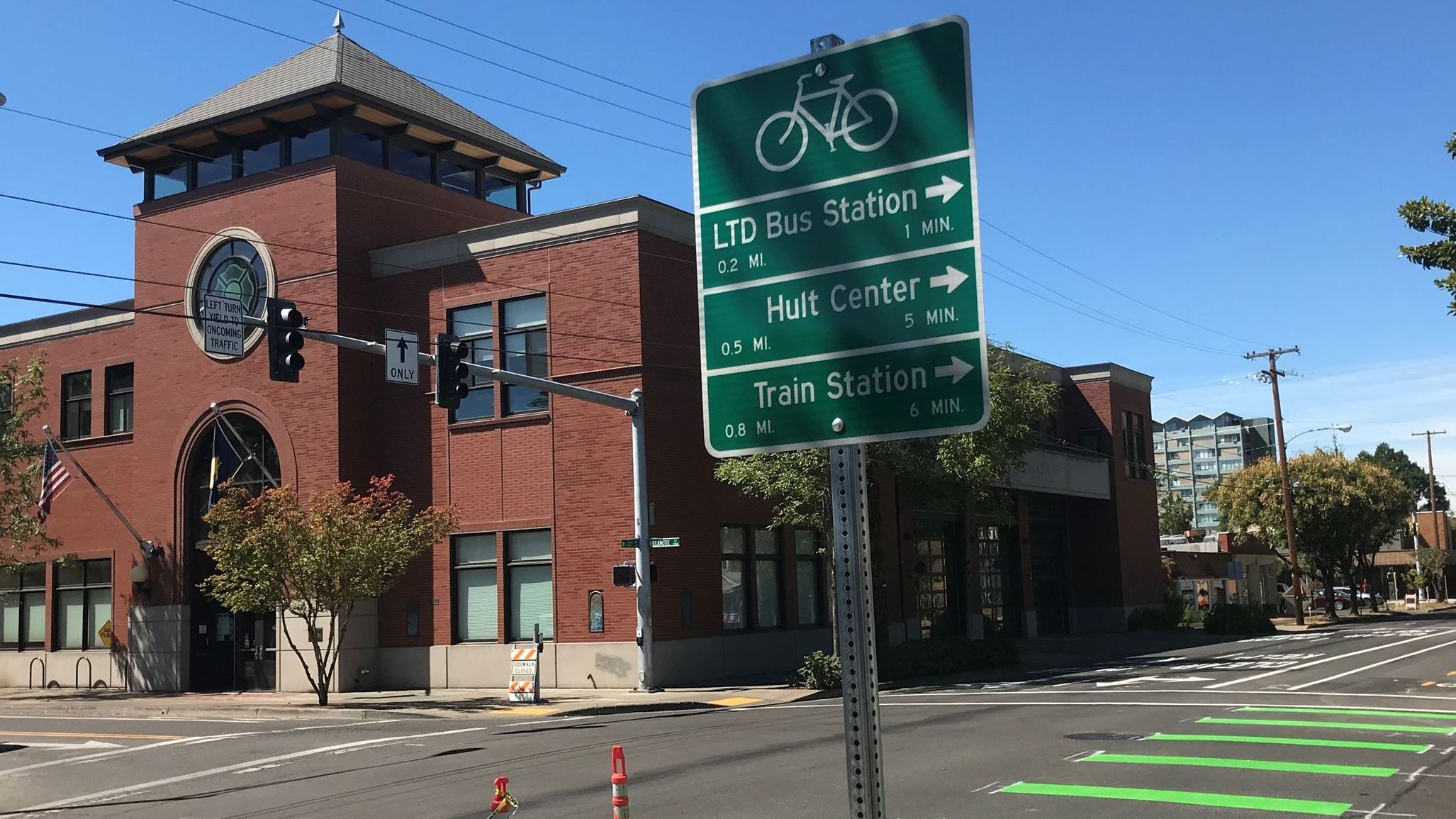 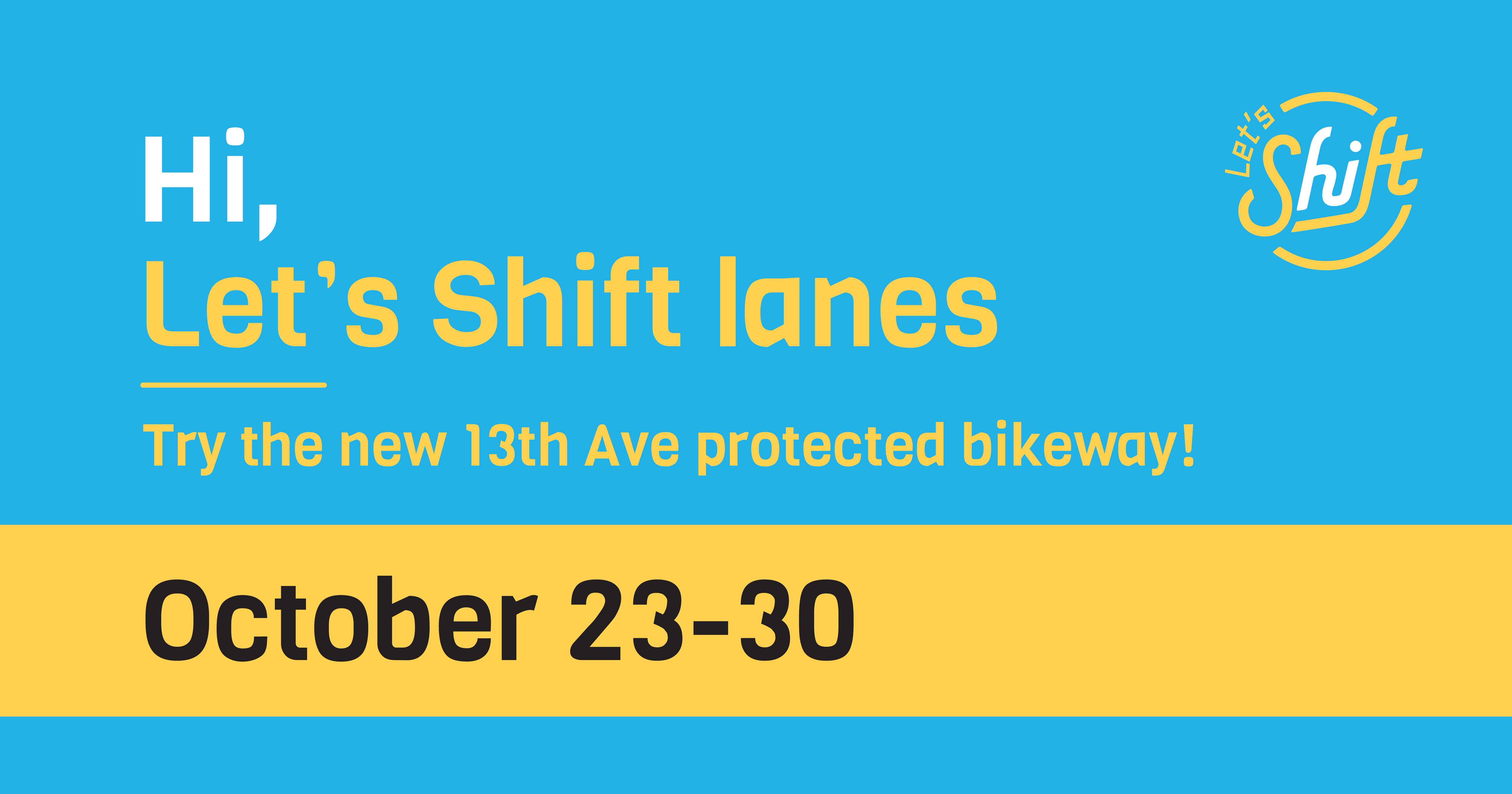 The 13th Avenue Bikeway began construction in April and will open for use in October of 2020. The bikeway features a two-way protected bike lane on 13th Avenue from Alder Street to Lincoln Street linking the University of Oregon Campus to Downtown Eugene. A newly installed concrete barrier provides physical separation between the bikeway and the vehicle travel lanes. To facilitate two-way bike traffic, signalized intersections have new bike-only signal phases to prevent turning conflicts between people driving and people riding bikes.

Two-way protected bikeway between Lincoln Street and Alder Street including the following elements: 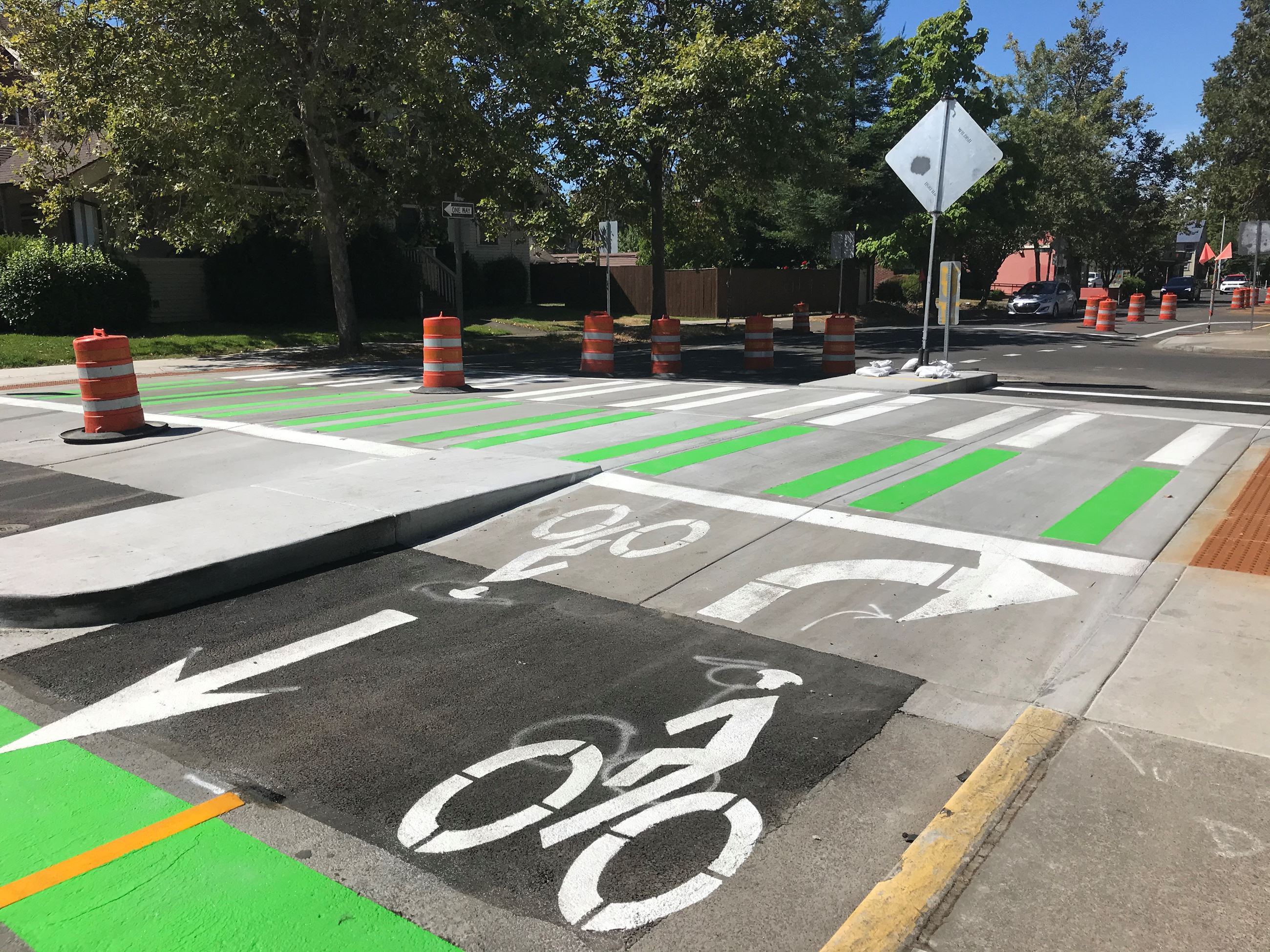 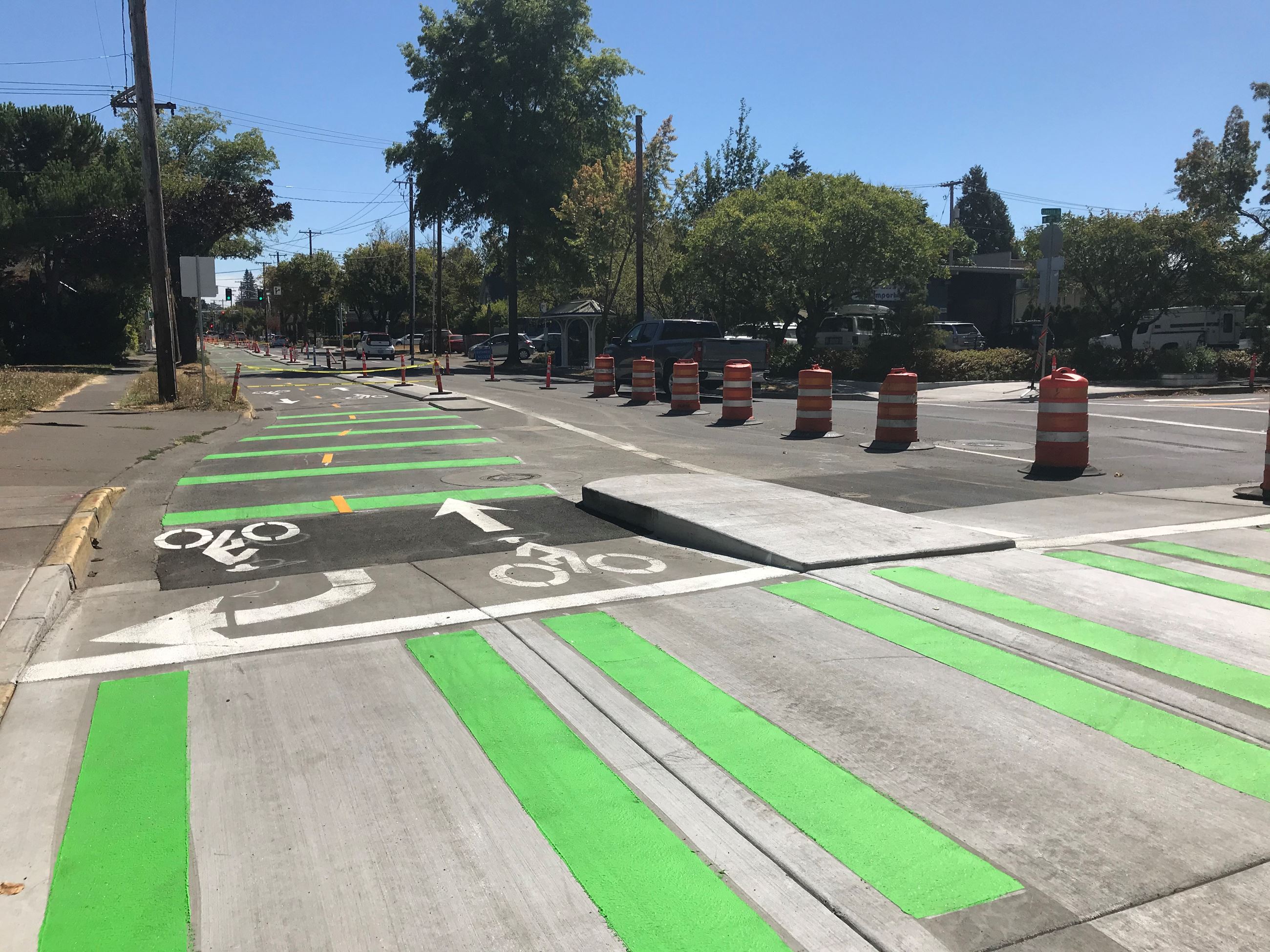 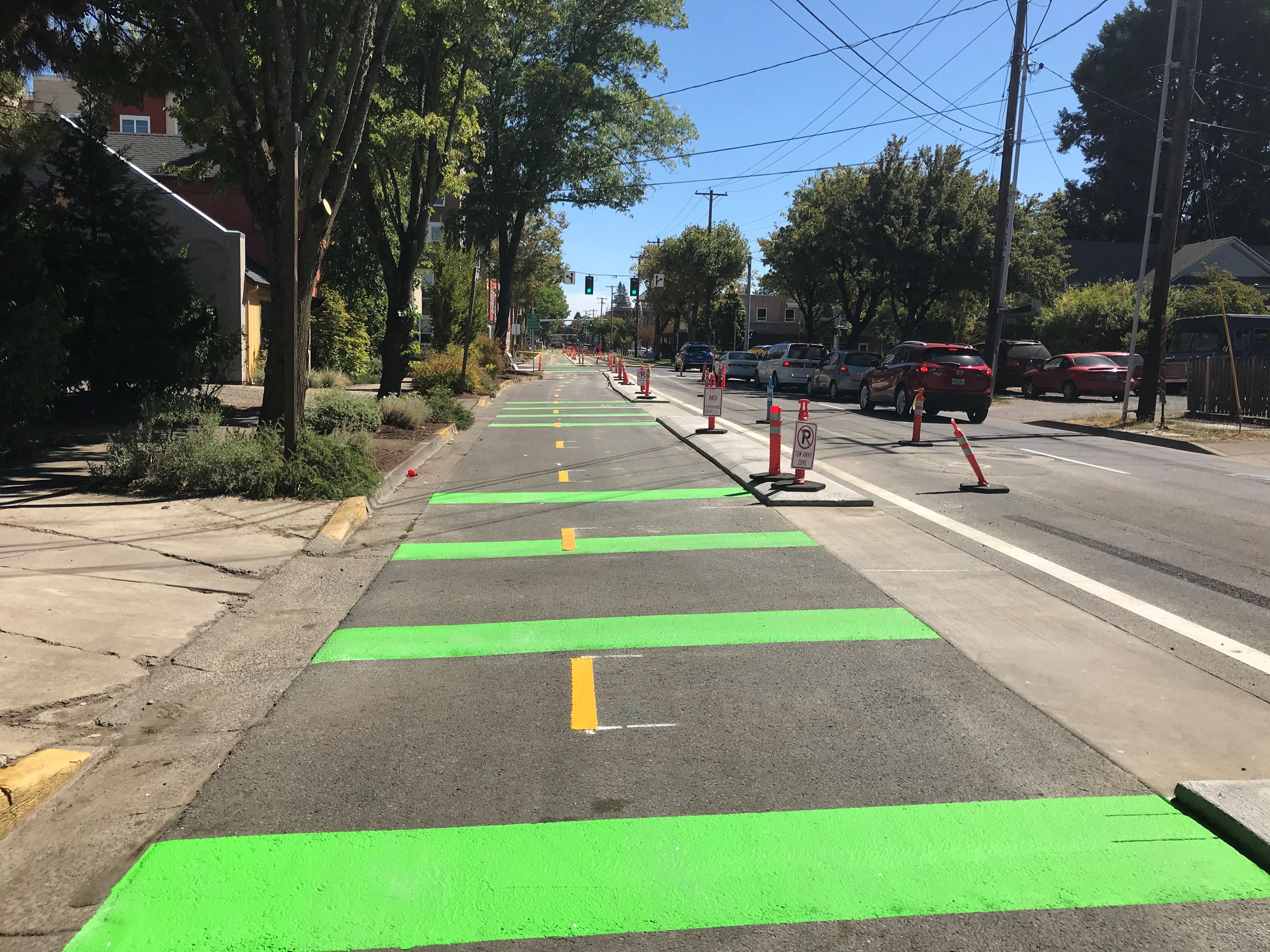 People biking will be able to access the bikeway on the west end at Lincoln Street, at the east end at Alder Street, or by turning from intersecting streets onto the bikeway. At the Alder entrance, thanks to the newly added two-way bike lane from Kincaid to Alder, riders will be able to ride seamlessly from the entrance of campus onto the protected bikeway at 13th and Alder.

The Lincoln entrance has several options to enter the bikeway. One option for accessing the bikeway at Lincoln is to use the raised crosswalk at the intersection. The crosswalk has color-coded designated crossing space for people walking (white paint) and people biking (green paint). Note that under Oregon law traffic is legally required to stop for you if you ride at pedestrian speed or dismount and walk your bike in the crosswalk. Oregon law requires a person driving to stop for people walking or biking slowly through a crosswalk when the person driving is given adequate time to stop. View FAQ and answers about the bikeway.

Tips for riding the bikeway:

For current information on transportation construction projects in Eugene, please go to www.tripcheck.com or visit the City of Eugene’s project web site .

Construction of the 13th Avenue Bikeway started April 13, 2020.  During construction people biking will need to detour to 12th Avenue. People traveling by vehicle on 13th Avenue should use the temporary traffic signals.

Funding for this project is from multiple sources. Grant funding from the Oregon Department of Transportation is provided through the All Roads Transportation Safety (ARTS) Program. This program was developed to address safety needs on public roads and aligns with the city’s Vision Zero policy. The City of Eugene received $2.3M from ARTS.

The project also includes regional funding through the Surface Transportation Program-Urban (STP-U). These funds are distributed through the the Central Lane Council of Governments. The program provides flexible funding to improve and preserve transportation infrastructure related to walking, bicycling, riding the bus, and private automobile use.  The City of Eugene received $450K from STP-U.

In addition, David Minor’s family has committed $150,000 to the development of the bikeway. David Minor lost his life in a car-bike crash on 13th Avenue at Willamette Street in June 2008. The city will consider naming the project the "David Minor Bikeway" according to city procedures for naming infrastructure.

The LiveMove student organization at the University of Oregon started the conversation by assembling a report called the "13th Avenue Downtown-Campus Corridor Concept Plan". The plan envisioned a two-way bicycling facility on 13th Avenue from the UO Campus to Downtown Eugene. It also enumerated the amount of contraflow bicycle riding (westbound) on eastbound 13th Avenue. Based on positive community feedback from this report, new student housing developments on 13th Avenue, and recommendations to add the project to the Transportation System Plan, the city began a robust public outreach process in 2013.

The first step was to determine if there were alternative routes that would not necessitate changes to 13th Avenue. This included a community conversation at an open house in December 2013. The open house was used to test whether existing facilities on 11th Avenue (bike lane), 12th Avenue (bike route), and 13th Avenue (bike lane) were sufficient for bicycle traffic. There were over 100 attendees at the first open house, and many agreed that 13th Avenue needed some improvements.  Familiarity with the two-way bikeway on Alder Street, installed in 2011, led many to state that a similar facility on 13th seemed like a solution worth considering.

Given the outcomes of the community conversations, city staff hired an engineering consultant to look into traffic and parking impacts of developing a two-way bikeway on 13th Avenue. Traffic operations staff agreed that a two-way bikeway could function on 13th Avenue with adjustments made to signal timing. It would require that the bikeway had it’s own signal phase separate from the automobile traffic phase.

With the knowledge that a two-way bikeway was possible, staff canvassed the corridor again and scheduled another open house for April 17, 2014. At the April event, staff summarized the first open house and asked attendees to summarize their preferences for bicycling between the UO campus and downtown. Safety was the primary issue and many felt that a protected bikeway, with separate signal phases, would improve network and safety.

Later in 2014, staff scheduled meetings with business and property owners (June 19th-20th, 2014) and a public meeting on June 24, 2014.  Staff also met with PeaceHealth and the University of Oregon. The result of the public process was for city staff to implement infrastructure changes on 13th Avenue, including the two-way bikeway.

Since those initial conversations in 2014, city staff assembled funding from several funding sources to pay for project development. Additional analyses have also been completed including a traffic analysis and conceptual intersection sketches.  Alta Planning + Design developed the intersection sketches linked below.  These are concepts, not final designs, but they help to illustrate potential concepts that were used to design the 13th Avenue Bikeway. View the 13th Avenue Sketchbook designs here.

In summer 2018, city staff canvassed the corridor again, talked to businesses, and met with the University of Oregon, PeaceHealth, and the University Business District to discuss the project. 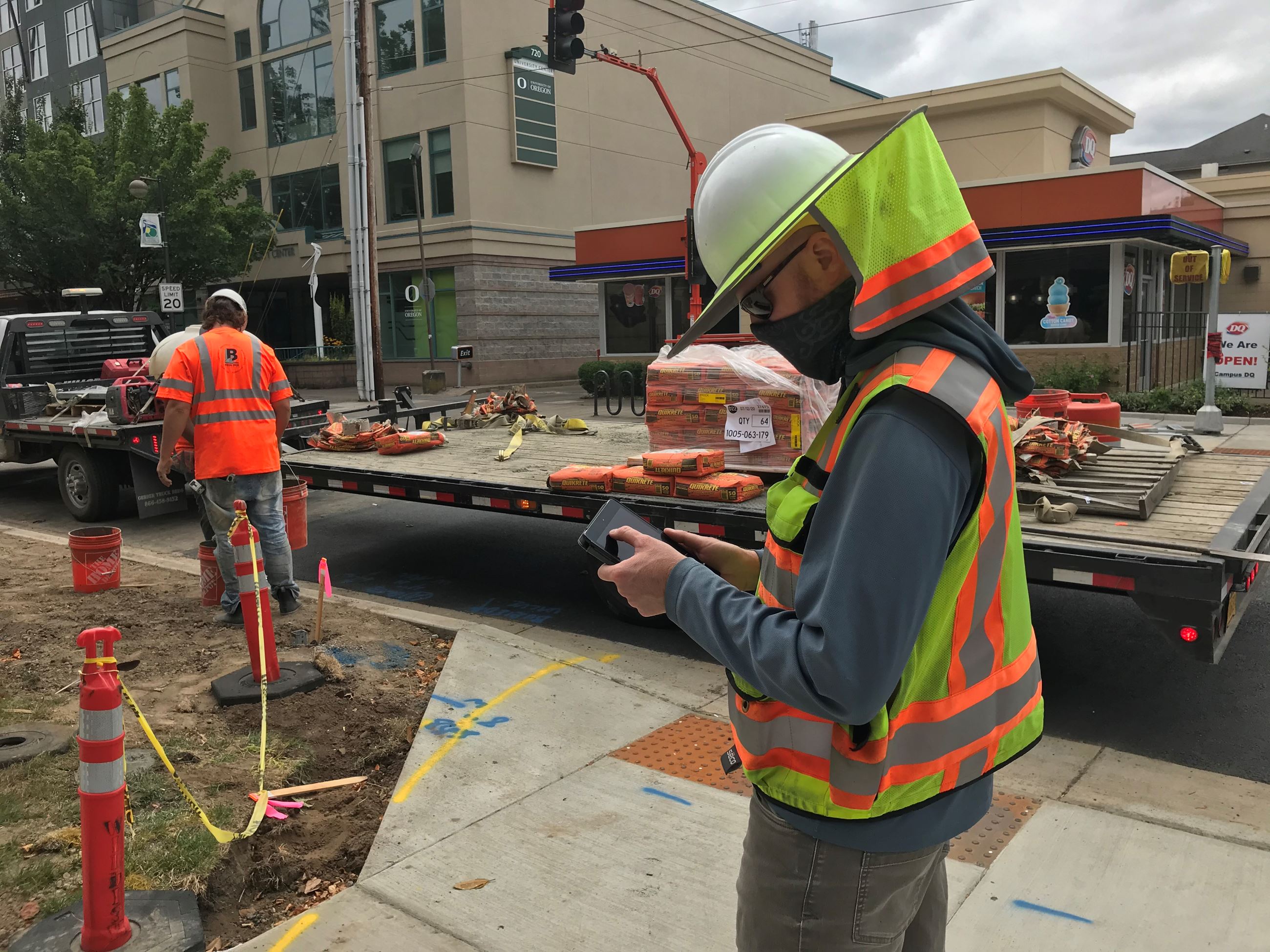 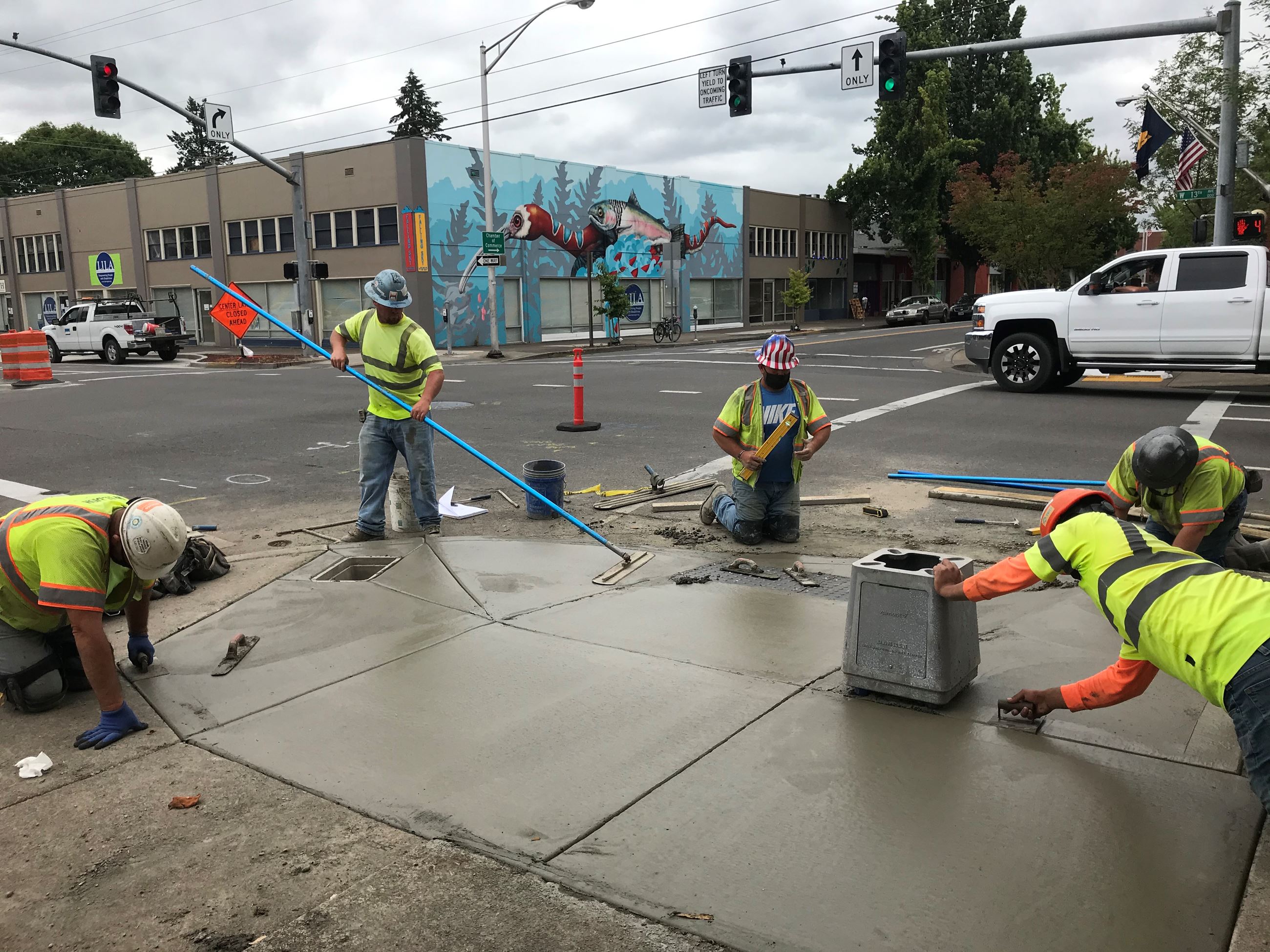 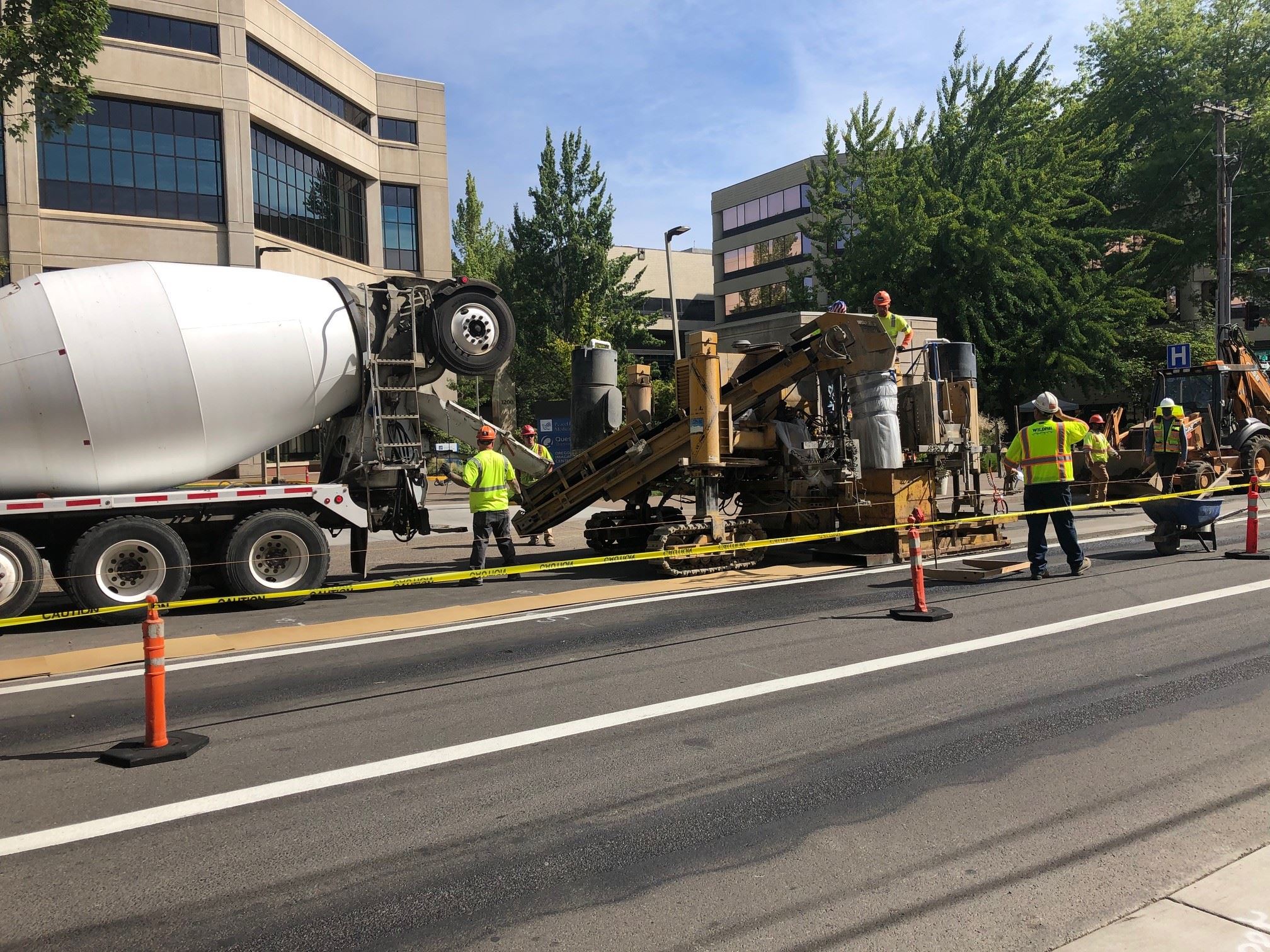 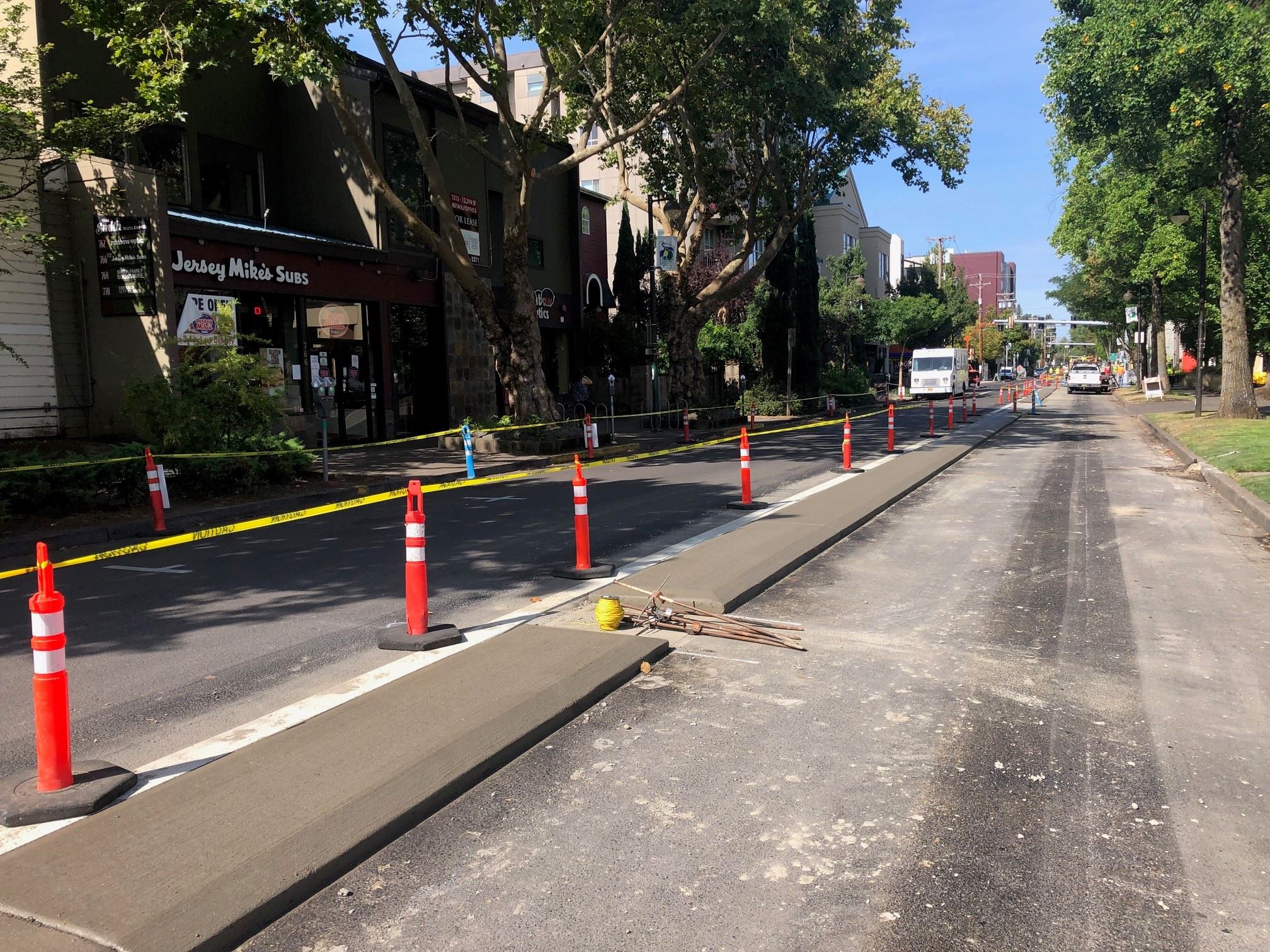 On December 4, 2013, the first community meeting to discuss transportation options between campus and downtown for people who ride bikes was held at the Eugene Public Library. Participants were presented existing conditions information for three transportation corridors: 11th, 12th, and 13th Avenues. After each corridor was introduced, respondents were asked to describe personal experiences and opinions related to traveling through each corridor.

A second community meeting was held on April 17, 2014, to discuss improvement options for traveling by bike from campus to downtown.

The final community meeting was help on June 12, 2014, to present draft staff recommendations. Staff took public comments at the meeting and held the public comment period open until July 15, 2014.