Planning for the Next Two Generations

Urban Reserves are a special designation, allowed by state law, for lands outside the urban growth boundary (UGB) that can be considered a first priority if and when Eugene needs to expand for its growing population. Land designated as Urban Reserves will remain rural, and cannot be urbanized, unless it is brought into the city’s UGB through a formal process for expansion.

Eugene’s UGB is currently projected to have enough land for our population through 2032. Since population and development trends can change, Urban Reserves allows us to plan beyond 2032. Urban Reserves will identify enough land for the housing, parks, schools, and jobs needed by Eugene’s population in the long-term future (between 2032 and 2062) while implementing the area’s regional open space vision, including preservation of significant farm and forest land, waterways, and natural resources.

With the help of many stakeholders, we have completed the project’s technical and suitability analysis and have developed a range of Urban Reserve Options for review. We will take these options—with the input we receive—to City and County decision-makers later this summer and fall for their direction, with a goal for adoption by next spring.

The options, and the work that led us there, are described in the Urban Reserve Options Story Map, below. It gives project background, explains the high-level pros and cons of each option, and is interactive. After you visit the Options Story Map, check out our Engage Eugene page: it includes project materials and a Q&A.

Check Out the Four Options

For a more detailed look at each Option, click on the thumbnails below for a downloadable PDF.

Thank you to those who completed the survey! It is now closed. We will be publishing the results and sharing them with the Eugene Planning Commission on August 3rd and the Lane County Planning Commission on August 4th. If you missed the survey, it's not too late to share your input! You can still review the story map and other materials, provide public comment, contact staff, or ask questions using Q&A feature on Engage Eugene. We look forward to hearing from you!

Check out the Technical Analysis Story Map below for an interactive visual essay of the Urban Reserves technical analysis, which includes four major parts:

The Land Need Infographic has more details on the estimate of land needed for Urban Reserves.

Please note that the story map works best in Chrome.

The suitability analysis evaluates all the developable land in the study area by considering it in terms of the following four factors (dictated by state rules), then dismisses land that, on balance, would be unsuitable for Urban Reserves based on this evaluation:

To review our draft analysis by subarea:

Suitability Analysis Reports were developed for 16 subareas, listed below. File sizes are large and may take time to download.

The Urban Reserves Suitable Lands Web Map is an interactive map that shows the results of the suitability analysis. Search for your property and see detailed taxlot-level information. This webmap is part of our preliminary analysis – it does not show Urban Reserve Options – see the Options Story Map for more on that.

We held three meetings for residents in January with over 125 attendees. It was an opportunity to get updated on Urban Reserves, hear about next steps, and have questions answered. Review the information provided at the Open Houses below: 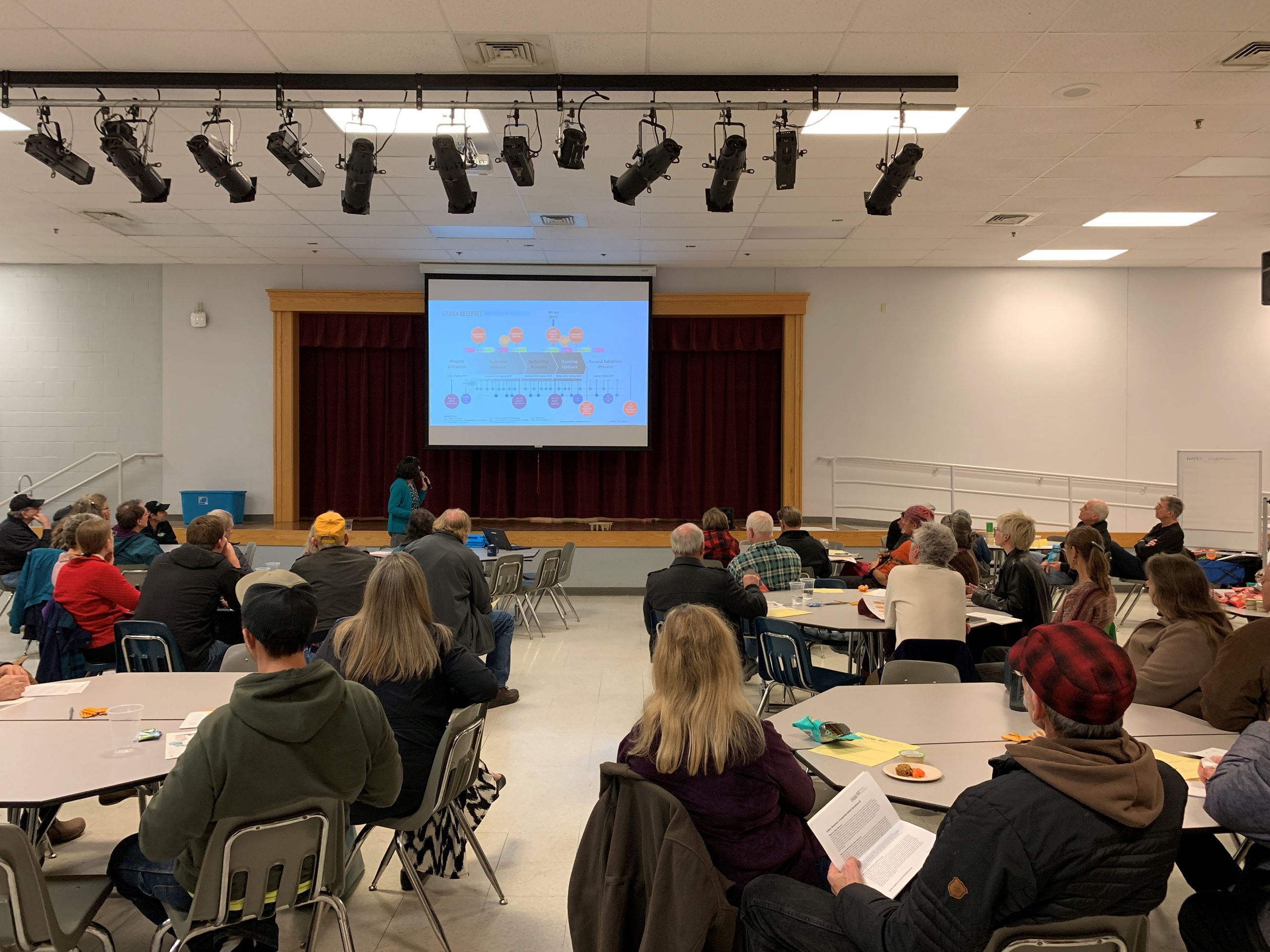 Two important documents guide Urban Reserves planning. The Public Involvement Plan outlines the outreach process, key stakeholders, and how various groups can help shape the project. The Draft Project Charter is an internal document that outlines scope of the project and key milestones.

A variety of groups are lending their time and expertise to this process. Check out the full list of committee and team members, including a Triple Bottom Line Sounding Board, a service provider working group, a technical advisory committee, and the project management team.

In August 2018, the City Manager appointed 13 community volunteers to serve on the Envision Eugene Technical Advisory Committee (EETAC), a new department-level advisory committee that has been playing a key role in both the Urban Reserves and Growth Monitoring projects. Members have a wide variety of interests and come from around the City, with one representative living outside the UGB.

The EETAC been guiding Urban Reserves Planning by reviewing technical information that will be used to inform policy decisions, providing feedback to staff on technical-related issues, and reviewing assumptions and analysis related to long-term growth management-related efforts. You can keep up to date on their work at the EETAC project webpage, which includes the member roster and meeting materials.

Interested in keeping tabs on the urban reserves planning work? Sign up to be on our interested parties list! We will send you monthly project updates through the EUG Planning newsletter and notify you of upcoming meetings and opportunities.