What is the project?

The City of Eugene is starting a one-year planning process for Franklin Boulevard from Alder Street to Interstate 5, including Garden Avenue. The purpose is to transform Franklin from an auto-focused state highway to a pleasant,  multi-modal urban street that is safe for people walking, biking, riding the bus and driving

Why is it needed?

Franklin Boulevard, with its wide lanes, can be an unsafe and uncomfortable street. For people who walk, bike, or ride the bus, Franklin Boulevard can be a significant barrier to getting from place to place. Because of that, fewer people choose to walk or bike to make connections between the University of Oregon, surrounding neighborhoods and Willamette River trails to the north, hindering the City of Eugene’s long-term efforts to reach climate reduction goals.  The project will also encourage new ways for businesses and neighborhoods near Franklin Boulevard to redevelop the boulevard into a more comfortable connector of places, rather than a divider.

Isn’t this an ODOT road?

What is the project area?

The City is working on plans to transform Franklin Boulevard into a street that serves all travelers including people who walk, bike, ride the bus and drive. The project area extends from Alder Street to Interstate 5 and includes Garden Avenue and its connections to Franklin Boulevard. 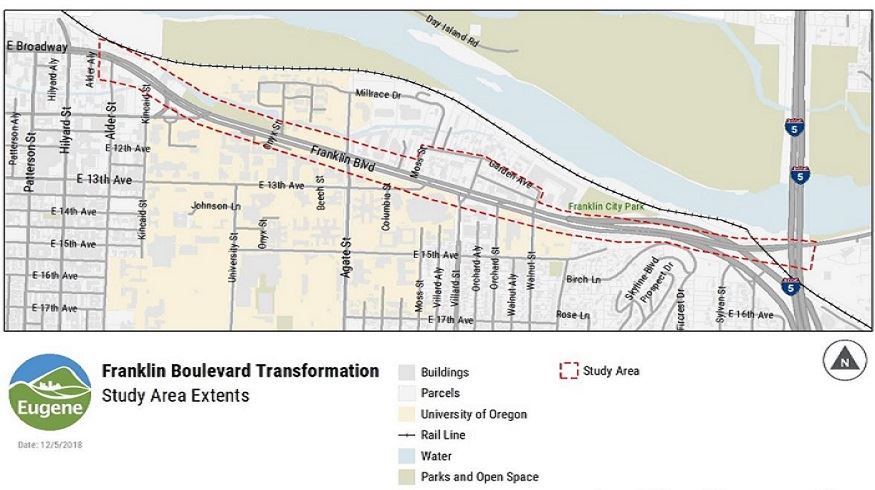 Why was Garden Avenue included in the project area?

Garden Avenue is included in the project due to its connection to our multi-use path system.  Currently, there is a gap in the river trail between Moss and Walnut Streets where people walking or biking on the path have to get out onto Garden Ave. By including it in the project area, it opens up the door for the possibility of transforming Garden Ave into a street that is safer for all persons using the road.

Why weren’t the south side of Franklin and its connecting streets included (e.g., 15th Street) in the project area?

The south side of Franklin is included in the project area, including all of the streets Franklin currently intersects with.

How can the public influence the design?

The project kicked off in October 2018 and will conclude in 2020. Opportunities for community input are being provided throughout the process, including design workshops and open houses structured to bring stakeholders together. Workshops and open houses took place January 28-31 2019, May 29th, 2019, and March 10th, 2020.  Sign up for the Franklin Blvd Newsletter here to keep up to date!

Is the design already determined?

No. The purpose of the two workshops is to create the preferred design with community input considered throughout the process.

Will the project narrow the road and if so, who decides, and when?

We don’t know yet if the project will narrow the road.  The City of Eugene Public Works – Engineering Division will decide, input from stakeholders and the public will influence decisions made along the way.

What funding source is paying for this planning process?

The planning process is funded by the United States Federal Highway Administration, with grants administered by Central Lane Metropolitan Planning Association.  The City is required to match these grants at 10.27%.

Will bike infrastructure be a part of the design?

Yes, for three reasons. (1) The Oregon Bike Bill (Ordinance 366.514) requires that a minimum of 1% of all funding received for highways be used to implement pedestrian and bicyclist paths. (2) Eugene’s Climate Recovery Ordinance has set the goal that by 2030, community fossil fuel use will be reduced by 50% of 2010 levels. In 2016, it was calculated that this would require an annual average emission reduction level of 7.6%. (3)The Eugene 2035 Transportation System Plan has set the goal of tripling the number of trips made by transit, bicycling, or walking. This would help reduce vehicle use, which in turn would reduce fossil fuel use, which in turn would help to achieve the Climate Recovery Ordinance goals.

Construction will be dependent on grant funding.  The earliest construction that may occur would be in 2022.

What funding source will pay for the construction?

How will the bike path connect to Springfield?

I-5 serves as the dividing line between Eugene and Springfield. The existing multi-use path already continues east past I-5 into Glenwood.

Why spend this planning effort here and not on other roads more in need of safety improvements?

The City of Eugene’s 20-year long range land use (Envision Eugene) and transportation plans (Eugene 2035 Transportation System Plan) identify Franklin Blvd as one of six key corridors in the City. Key corridors are defined as streets that reduce reliance on automobiles. They enable short-distance walking and biking trips due to proximity of land uses such as higher density housing, parks, retail, and employment centers. This is paired with current or planned frequent transit service (approximately every 15 minutes or less). Click HERE for a map of key corridors.

Is there a high crash rate on Franklin?

There is a crash history on Franklin. The severity of crashes range from property damage to major, life-changing incidents. Existing data for crashes span from 2007 to 2016. During that time-frame there have been 111 crashes on Franklin. They are listed below by crash severity.

More Questions Will Be Answered As They Come In!